The year 2014 had been wonderful for the DC comic Universe, so much work and action had taken place, and fans really enjoyed and talked about them, just to wrap things up, DC comics is still packaging tangible books for comic-novel Lovers. So we piled these new onesm we bet you don’t wanna miss them this period. Just before the year runs out. 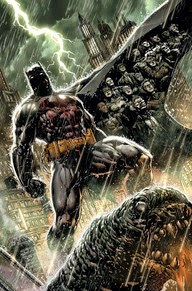 In the wake of FOREVER EVIL, the world looks at heroes in a different light, creating tension between Batman and his allies and the Gotham City Police Department. When a gang war breaks out and new villains arise, it’s up to the Dark Knight, Batgirl, and others to turn the tide as best as they can – but will the GCPD be a help or a hindrance? Plus, a fan-favorite character makes her long-awaited DC Comics – The New 52 debut: Stephanie Brown! Don’t miss these stories from BATMAN ETERNAL #1-20!
Batman Eternal (2014- ) #1 (Batman Eternal (2014-))

HAVE YOU SEEN THIS? – ROBIN RISES – Peter J. Tomasi Unveils The Return of Robin!

BATMAN: DEATH OF THE FAMILY BOOK AND THE JOKER MASK SET 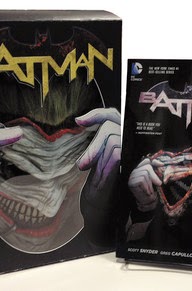 This new collectors set includes the critically acclaimed tale DEATH OF THE FAMILY from the superstar #1 New York Times best-selling team of writer Scott Snyder and artist Greg Capullo.
Now, this seminal Batman trade paperback graphic novel is paired with a replica hand-painted vinyl latex mask of The Joker that features sewn-on hair and a white elastic band. It’s a must-have for any fan of Scott Snyder’s groundbreaking work!
Batman: Death of the Family Book and Joker Mask Set 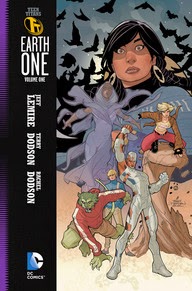 In this new, original graphic novel, the young heroes of the Teen Titans never felt like normal kids…but they had no idea how right they were. Their seemingly idyllic Oregon upbringing hides a secret – one that will bring killers, shamans, and extraterrestrials down on their heads, and force them into an alliance that could shake the planet to its foundations! The superstar team of writer Jeff Lemire (ANIMAL MAN, GREEN ARROW) and artist Terry Dodson (WONDER WOMAN, HARLEY QUINN) reinvent DC’s youngest heroes, with an all-new mythos in an all-new world!
Teen Titans: Earth One Vol. 1