Both Superman and Flash, none were consistent in winning. After several counts I did, the score ended up, SUPERMAN won that Race. 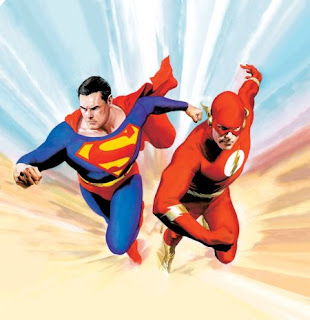 Well. If you haven’t watched the competitions, I think you should check You Tube,  there should be few Videos, but let’s come to face some Facts, let’s Ask ourselves:

Why Should Superman Even Run Faster than Flash?

Flash is really Good at running, and Being Hasty, but then Their Speed varies with few things.

On the other hand, few watchers have remarked Superman as always “hardworking”, saving lives, trying to pick things from his past, no night party and so On.
NOT everybody likes Superman that way…. being too serious. But does that have to do with SPEED in Intelligence? No way

Several times I had seen same Superman, do the Spinning to Form Tornadoes, I haven’t seen Flash do that, well, if not for Faster Speed, Superman wouldn’t spin 3 rounds.

So that’s All I can Say about this motion about Superman and Flash, Superman aint Human, Flash is. And that’s a very Huge Edge!
Guess this is the very First Debate I’m bringing Up here. Wally is my man, but we have to face to it, Clerk is faster…. Hope you yield?

4 thoughts on “Superman VS The Flash – Who’s Fastest?”

Step Up 5:All In, Assembles Actors From Previous Parts